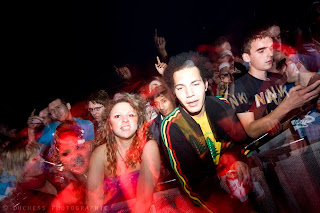 When Pinch staged the first one in 2004, this music was the preserve of a small clique around FWD>> and the Big Apple record shop in Croydon. The early Subloaded dances triggered an explosion of local creativity, and within two years dubstep was a global movement, with Bristol rountely referred to as its "second city". Subloaded is where we started, then. Is it still where we're at?

After a typically modest, musically inclusive warmup from Peverelist, the answer comes from Digital Mystikz, as the night’s first plunging bass drop unleashes the sound system’s weight. If you’ve never heard dubstep at battle volume, you’ve never really heard it at all. There’s nothing like the physical shock of this music through a serious PA, and this one is serious. It shakes your teeth, your bones, the fabric of the building. It sucks air from your windpipe, and inhibitions from your mind. Within seconds, the head-nodding is consigned to history. 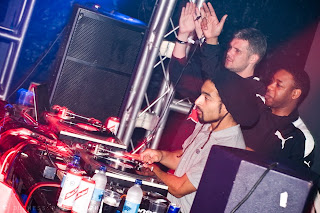 Ice well and truly broken, fellow DMZ man Loefah steps back from the abyss, and steers a course between the extremes, riding the tension.
Heavy on material from his fine Swamp 81 label, it’s the most satisfying selection so far. Stripped down and austere, but with pain-staking attention to detail, it’s exactly what you’d expect from Loefah – after all, his own bass sound is the only man-made structure visible from space.

As always, Bristol receives Pinch rapturously, and as always he earns it. His style is less minimal than Loefah’s, but no less powerful for it. Tribal drum patterns and eerie half-melodies add colour and texture, but they don’t soften the blow - the pressure barely drops for a second. 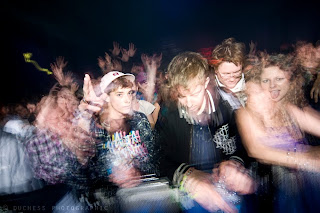 Dubstep isn’t the only music on offer tonight. There’s a rootsy vibe in the tunnel, peaking with a live PA from men-of-the-moment Dubkasm, while Dub Boy and Atki 2’s karnival house (or is it UK Funky?) brings rays of tropical sunshine to the cave. Even the main room lets off steam eventually, as Metalheadz legend Doc Scott tears off a spectacular string of 90s classics, including the ricocheting snares of J Majik’s ‘Your Sound’, and the claustrophobic joystick jungle of Jo’s ‘R-Type’.

He’s followed by Breakage, whose restlessly inventive set finally tears down the walls between genres.

We all know why we’re here, though. Dubstep’s purest form is often its most powerful, and the music at Subloaded’s heart is as pure as it gets. With this lineup, and that sound system, it has rarely sounded as deadly as it does tonight.

This review was originally published in Venue magazine. Thanks, as always, to Ellen Doherty for the pics.

Adam Burrows
I edited a zine called Choke and have also written about music and clubbing for Venue, Bristol24/7, The Bristol Post and Metro. Life member of the noise-rock band Big Joan and joint development lead of the Flag Fen project. Representing The Old Grey Whistle Posse.